© 2021 Spanish Dance Singapore - Made with love

Feria de Abril, the largest party in Seville and the Spanish Joy of Living 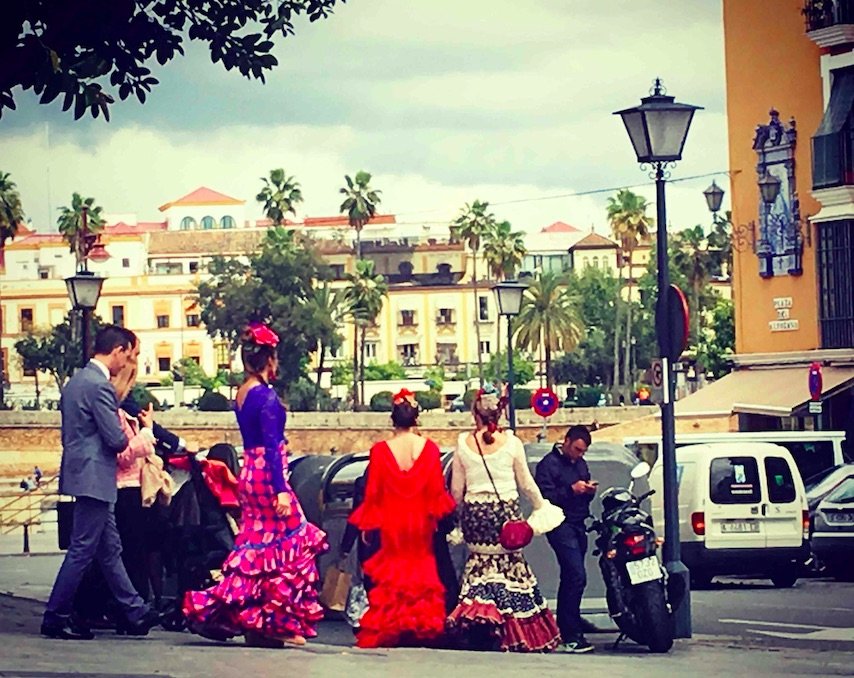 If there’s one party Seville is known for, then it’s the Feria de Abril or the April Fair.

Imagine a marathon of festivities – uplifting music, Sevillanas dance, gatherings of beautiful ladies in their gorgeous, colourful Spanish dresses and men in their suave outfits.

There is much merry-making, eating, drinking and dancing, from night to the early hours of the morning. The next time you dance the Sevillanas, know that you are part of this living culture that connects you to the very source in Spain!

This is a historical year however, with both the Semana Santa Holy Week and the Feria de Abril being cancelled in this March-April timeframe. You guessed it –  because of the coronavirus situation in Spain.

But no lockdown can suppress much-loved traditions and the Spanish alegria, joie de vivre spirit! Manuel and I decided to celebrate at home on this Saturday, when the Feria de Abril would have officially started.

This Saturday night is also called the Noche del Pescaíto (Night of the Fish, because fish is traditionally eaten!)

Besides his talents as flamenco maestro, his other talents manifest in culinary ways. Manuel gets busy cooking some typical food we eat during the festive season – tortilla, seafood. We’re lacking the pescaito though.

Considering he doesn’t cook that often, time and again, I’m surprised at how much of a natural, instinctive cook he is. Plus ever efficient, he got all the dishes cooked so smoothly, all I needed to help him with was to lay the table!

Rebujito is the drink that they typically have during the Feria. It’s a mix of manzanilla, an alcoholic aromatic drink and Seven-up. You’ve heard of the well-known sangria drink, now you know of another. Unfortunately, in confinement, we don’t have rebujito, so we make do with good red wine.

We can’t have a Feria without dancing the Sevillanas, of course! With all my voluminous Feria Sevillanas dresses back in Singapore and not being able to go out to the shop to pick a new dress I’ve ordered, I make do with my usual Flamenco skirt and flower in my head.

Manuel can’t resist having even more fun and decorates himself with a turban!

What’s a typical Feria de Abril day? I’ve asked him to share with us. So find out here in this video!

A Glimpse of the Actual Feria de Abril

Since I can’t go to the Feria this year and show you what it actually looks like, I searched for photos & videos of the past Feria de Abril I attended, to give you an idea of the ambience.

In this video,  you’ll see the ‘alumbrao’, which is the light-up of the portada – the decorative entrance to the Feria ground.

It’s really a crowded scene, so if you do attend the alumbrao one year, then be prepared for the crowds gathered there to count-down to the Light-up.

When you enter the Real de la Feria, the place where the Fair happens , you’ll be pretty amazed at the size of it. There’s lots to see and explore.

Multitudes of traditional casetas (tents) dot the Feria grounds, the size of many football fields combined. The night is bright with hundreds of thousands of farolillos (lanterns) hung across the streets.

Each caseta is individually decorated with its own touch. Take a peek into the casetas and you’ll see a bustle of activity: people dancing, music-making, and yes, of course, eating and drinking as usual.

Origins of the Feria de Abril


The beginnings of the Feria de Abril would have looked pretty different. Then, it started out as some sort of marketplace or fair (‘Feria’ is a ‘fair’), where animals were traded. I can imagine lots of interaction, eating and drinking too, and how that could have possibly shaped the way the Feria is today, with its energy and ambience.

We’re in Seville, so the quintessential dancer here is the Sevillanas, a regional dance of Spain. While not flamenco, it has been aflamencado in that it has taken on flamenco characteristics. The rumba flamenca is also danced.

I asked Manuel his memories of the Feria, and he shared that it was a busy time of much learning as a youthful flamenco dancer. His teacher of that time, Jose Galván, took the young Manuel Betanzos and Israel Galván to the Feria. They moved from one caseta to another performing flamenco for the guests. He really enjoyed those times of dancing.

Sevillanas, no matter where you are in the world!

In this video, I’ve also included occasions of us dancing Sevillanas in Singapore. It’s such a well-known dance, so no matter where you are in the world, try picking it up  if you can.

The structure is the same, so you’ll be able to dance it with anyone else in the world who knows it!

The music is also readily available, there are thousands of versions you can enjoy.

The Spanish  Joy of Living

The Spanish alegria or joie de vivre can be palpably seen and felt. That sense of living and delighting in the moment,  the communal celebration. It’s the spirit of the people that makes a place special and brings life to their culture.

So the next time you dance the Sevillanas in the studio, don’t just see/partake of it as a choreography or technical movement. Gain from the sense of being part of this living culture and bring to it your own spirit of alegria, wherever in the world you are!

From Spain to Singapore and worldwide, anyone can learn and dance the Sevillanas. Here’s our Sevillanas in the ancient town of Hoi An, Vietnam.

Check your inbox and add us to your address book.

Join us in Singapore

Spanish Dance, to the lyrical melodies of the grea

Happy weekend! #Throwback to this May springtime i

Buenos días! A little time out, in a little corne

Rise & shine! Start the day fueling up with breakf

“Congratulations to the participants of today’

¡Buenos días! Weekend’s coming up and our NEW

Load More... Follow on Instagram
This error message is only visible to WordPress admins
Error: There is no connected account for the user 1452761183.
© 2021 Spanish Dance Singapore - Made with love