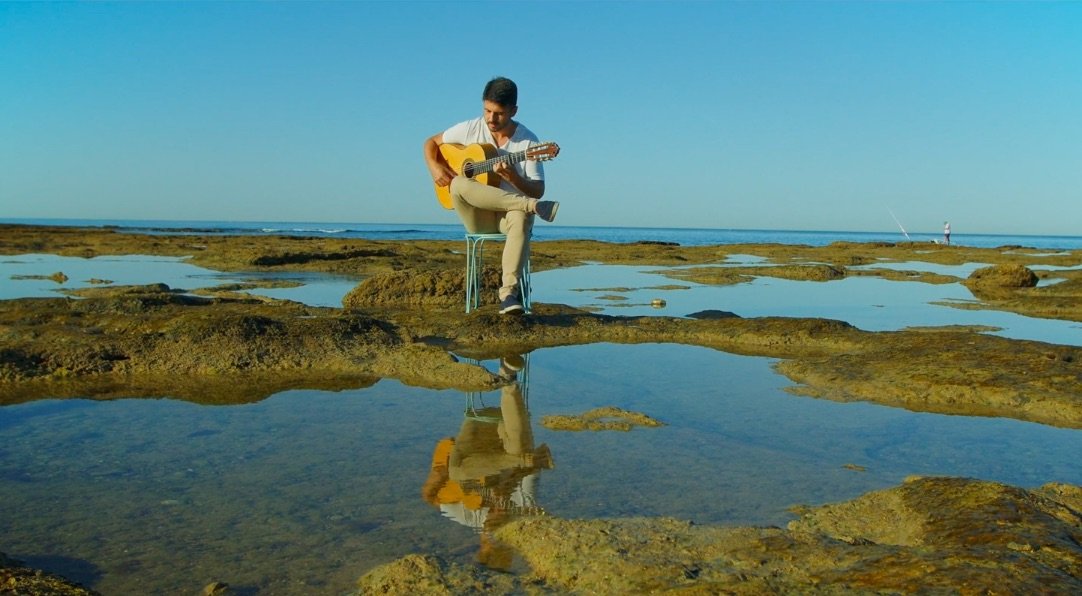 Visiting Cádiz fills you with a sense of joie de vivre. I can see why this seaside port town in Southern Spain gives character to the flamenco style of Alegrías. The word itself means joy.

Sometime this year, in June, we were bursting to get out of our houses. That was when Spain was phasing into its nueva normalidad or new normality. I remember 22 June was THE date that we were marking into our calendars and actively monitoring our countdown!

My three artists and I were developing our second Maestros Flamenco Online course on the Alegrías de Cádiz. So we said, okie, we’d really like to show our course members what Cádiz feels like. The beach and the sand, the sea, water and blue skies. When you think ‘beach’, it conjures happy thoughts and a touch of free spirit.

This joyous aire – air, energy or personality –  that’s what we interpret and express in our flamenco dance, song or guitar playing. We don’t dance Alegrías feeling sad, like a Soleá whose rhythms, melodies and song express heavier themes.

Cádiz wasn’t too far from where we were. Manuel Betanzos and I, in Sevilla, and singer Manuel and guitarist, Javier in Jerez (which is actually within the Cádiz province). So if you are ever in these 2 towns, know that you can zip over and visit seaside, port city of Cádiz, all within a day. It took us just under 1.5 hours by car.

Our meeting point, suggested by Felix, our wonderful video-artist, was the Peña Flamenca Juanito Villar. A Peña is a club or cultural association for flamenco activities. It’s usually less touristy than formal tablaos and frequented by members who are generally the locals. The ambience is different, so I quite like going to Peñas in Sevilla or Jerez. (Unfortunately, due to the Covid situation in Spain this year, Peñas and Tablaos are in peril. That’s another story …)

Back in Cádiz, the Peña Flamenca Juanito Villar  has an AMAZING location and it leads directly to the sea. That was exactly the scenic site for our filming.

Here’s a short behind-the-scenes video I made about our journey and day filming, shot and assembled with my Iphone.

You’ll be able to catch some sights of the drive past the countryside, crossing La Pepa – the longest bridge in Spain (!), arriving in Cádiz and driving around the old town.

A snippet of us wolfing down our bocadillos (imagine a Spanish baguette), while waiting for set-up. Our early rise meant none of us had breakfast, so I had to familiarise myself with the area and traipse around to find a bar that was open for takeaways. Have to feed the artists so they have energy! 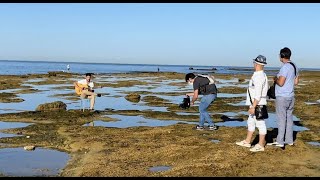 Each scene we shot had a distinct image. I really love the first scene we filmed – the low tide of the sea with the rock pools and reflections. We got Javier to sit out on the rocks and play the opening of the Alegrías (the same opening you’ll hear in our online course). His beautiful solo guitar melodies sound like the gentle ripples of the waters in the rock pools!

Javier cuts a solitary figure against the vast blue-green skies and sea. Filming takes a long while, and everybody in this team is really patient. Our calm guitarist weathers his whole leg going numb supporting his guitar.

And here’s this other video, which is what we filmed with the three artists. It’s shot with Felix’s new camera, I reckoned he was excited to try it out. It was like his new toy, only this toy costs a stunning fortune! But the resolution is stunningly superb and so are the images. 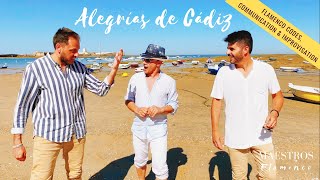 One of the aspects I appreciate of my flamenco journey has been to experience the people, places and cultures that I hear so much about in flamenco. This has greatly opened worlds beyond the practice studio, tapping into the source for inspiration and further understanding of this profound art.

There are tons of Alegrías letras or lyrics. Manu sings this in our online flamenco course and I appreciate it more each time I think about it:

That metaphorical salt that is the flavour of the land, its personality and Life!

So the next time you dance, sing, or play the Alegrías de Cádiz – whether in your class or whether you are performing –  let your spirit soar towards Cádiz and feel that alegría-joy! Flavour your flamenco!